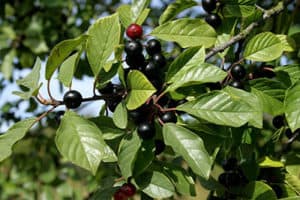 Alder buckthorn is a bush or tree reaching 3 meters high from the Rhamnaceae family with unbearable, dying fliers. The stems of the bush are light brown, without twigs. The cortex of the younger stems is oily-green, with clearly visible white or grayish-white strips (lentils). In the older branches and the stem the lentils are expanded in the form of gray spots. The leaves are almost nude and endless, oval-ovate, sequential. On the top they are dark green, shiny. Young twigs are light brown. Fruits are round, almost black, standing on long handles a few together in the bosom of the leaves. At first, when matured, they are red, then become black, spherical, slightly juicy, shiny with 1-3 single-seeded crushers.

It is found in the wet brushland and along the rivers, often mixed with the alder, up to 900 meters above sea level, mostly under the shade of the other trees.

Cortex Frangulae and Fructus Frangulae are used. The bark is harvested from April to May early in the spring when the juice of the plant starts to move, the peeled bark should not be thicker than 2 mm. Fruits are harvested from August to September shaking or burrowing bush, and when it can be picked by hand.

The alder buckthorn is used as a raw material in the chemical-pharmaceutical industry to produce a laxative preparation. It is also used in dye paint production.