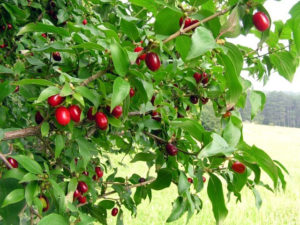 Cornus mas / Cornelian cherry is a shrub or kite, strongly branched up to 7 m high tree. The root system is highly developed. The stem has a yellowish-gray crust separating the tiles. The young branches are very hairy, and later they become naked, green or reddish-brown. The leaves are whole, opposite, pointed, under the whitish. Flowers are yellow collected in simple shades. The fetus is a squid with a fern (yellow or red), the yarrow having a spindle shape. It blooms in February - March before the leaves appear. The fruits ripen in August - September.

In Bulgaria there are the bushes, the forests and the stone slopes up to 1300 m above sea level. They plant it in parks and gardens as a decorative plant.

The fruit of Cornus mas L (Fructus Corni) of the dogwood is used. Bere in August - October. Drainers are obtained at the time of grain reception when they acquire their inherent coloration. Picking only with his hand. They are divided into two depending on their coloring - yellow with shades and red with shades.

Cornus mas is used in medicine as a diuretic clamp. They are also used in the production of marmalades, fruit and aromatic drinks - sherbets, wines and others.

They are also used in wood in the stools and machine-building, etc.