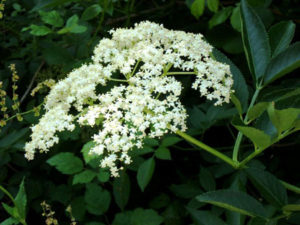 The sambucus nigra/elder is a large bush or tree of the family Caprifoliaceae. The root system is highly developed, penetrating deep into the soil. The stems are up to 10 m tall, with expanded branches, with a soft, white and plump heart. The leaves are opposite, some of them are leopard-shaped, with dark-green leaves, light green underneath, sometimes moth-shaped. The flowers are small, white, aromatic, gathered in large inflorescences on the tops of their stems and branches. The beasts are pristine, juicy, strawberry-like with 3-4 glossy oblong seedlings. The flesh of the fruit is dark red. It blooms in May-July, after the ripening, and the fruit ripens from August to September. It gives fruit abundantly every year.

In Bulgaria the sambucus nigra spreads along the rivers, wet forests, along the fences up to 1500 m above sea level. an old cultural plant, and now it's wild.

Picking is May-June. Cut off the entire inflorescence, under the place of its branch at the beginning of the flowering or when the large part is in bloom.

The roots are harvested from August to September after ripening. The beasts are picked at the same time at full maturity. The bark was bleached in early spring at the start of the juice movement of the plant. Dried eyed flower has a slight specific smell and sweet-slimy taste. The leaves contain tannins, resins, tannins, ascorbic acid, carotene and valeric acid, iron and copper.

In medicine, black elder is very used. Used for colds, runny nose, hoarseness, angina, cough, inflammation of the kidneys, skin rashes and gout. It is used as a laxative agent due to the resin substances contained in the ears. Externally, it is used as an ointment for wounds, and the content of tanning substances. The decoction of the leaves is used for baths in rheumatism, hemorrhoids.

It is used in the confectionery, liqueur and wine industry to give the aroma and color of the wine.