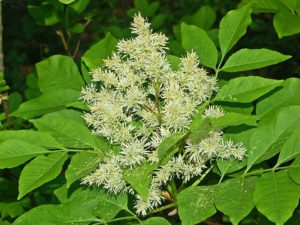 Flowerine - ash is a tall shrub or a small tree up to 7-8 m high, with a rounded crown and brown buds. The leaves are opposite, non-mitroped, usually 5-9 petals, pointed and fed. The flowers have a cup and a crown, collected in differently colored, pyramidal, up to 15 cm long broomsticks on the tops of the branches and appear after shedding. The fruit is a flat seed with a highly developed wing. It blooms in May - June, and fruits ripen in September - October.

The bushes also meet in the dry stone quarries in the foothills and mountain belt all over the country.

The cortex (Cortex Orni) of the male is used. Picking early in spring at the start of plant feed and after clarification with the forest authorities which are destined for felling. It is not allowed that the harvest is not exhausted. The cortex contains the phenolic coumarin glucosides esculin and fraxin, tanning substances, organic acids, sucrose.

Cortex of Flowerine - ash is used as a raw material in the chemical-pharmaceutical manufacture of aeskulin for increased fragility and permeability of capillaries in bleeding, hemeorides, varicose veins, etc. In folk medicine, contraindications for diarrhea and dysentery, etc. are used.