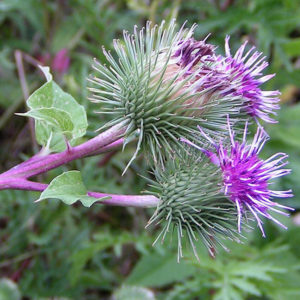 Great burdock is a two-year or perennial herbaceous plant of the Compositae family. The root is thick, soft, spindly and slightly branched. Stem is up to 2m high. woolly hair. The leaves are large, endless, followed by rare hairs, gray hair underneath. The colorful red-eyed, large, ball-shaped baskets on long stems in almost thyroid inflorescence. Blooms in June - October.

In our country great burdock can see the weedy and uncultivated places, the bushes and the dwellings.

The roots (Radix Bardanae) are used. Picking in August - October. The best production comes from one-year roots. Then they are juicy and soft, and in the second year some of them begin to groom. Do not pick roots in the autumn of the second year, because then they get busy and become burly.

Great burdock is used in medicine such as urinary tract and urinary tract, kidney stones and bladder, gastritis and stomach ulcer. Externally, it is applied in the form of paws in rheumatism, gout, smear, venereal diseases, etc. For hair growth a wide application is found in burdock oil, which is made with 10% roots with wood or almond oil.