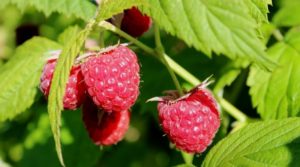 Raspberry is a tall, up to a 1.5-meter long bush with thin and upright spikes or without roots of Rosaceae seed. The roots are perennial and branching in a horizontal direction near the surface. The leaves are consecutive, large serrated, top green, bottom white green. Flowers are bipolar. The fruit is delicious, juicy, slightly fawn on the surface, with an egg-shaped shape. It blooms in June - August, and fruits ripen in July - September.

Red raspberry is encountered in damp stony slopes, screewills and woods. The leaves (Folia Rubi idaea) and fruits (Fructus Rubi idaea) are used. Leaves are harvested from June to September, preferably taken only from the young stems, which are at 1 year old. Fruits are harvested several times because of their non-simultaneous maturation.

In medicine it is used for urinary, cold, prolonged and strong menstruation, for gastrointestinal disorders. They are also used in the confectionery and pharmaceutical industries.